With a population of approximately 1.2 million people, Manitoba offers a variety of private and public resources for drug rehabilitation, alcohol treatment and detox. Use this page as your gateway to Manitoba quick facts, emergency numbers relating to drug abuse, alcoholism, and detox services as well as how to locate your health authority.

In 1870 most of Manitoba’s 12,000 citizens lived in small settlements and farms strung out along the newly created province’s winding river system. The rivers and the woods that grew along them were a source of water and wood, neither of which could be found on the rolling plains. There were no cities or towns. The village of Winnipeg at the forks of the Red and Assiniboine rivers had 100 residents.
The young Canadian government had plans for the prairie. It was to be turned into an agricultural colony(Ref1, Ref2) filled with immigrants from Eastern Canada, New England and the United Kingdom. These new Western Canadians would buy goods produced in Eastern Canada and grow wheat and other grains that would be shipped to Europe from Montreal. For this to happen the Aboriginal people of the plains would have to give up their rights to the land, a trans-continental railway would have to be built, central Canadian industries would have to be protected from competition in the United States, and hundreds of thousands of immigrants would have to be recruited. These were the key elements of what came to be known as Canada’s National Policy. In large measure this vision was fulfilled. By 1881 the population of Manitoba was 66,000; by 1901 it was 255,000; and by 1911 it stood at 450,000. In 1871 treaties were signed with the leaders of the Aboriginal people of Manitoba, and as the province’s boundaries were expanded new treaties were negotiated. Source: http://manitobia.ca/content/en/themes/ias 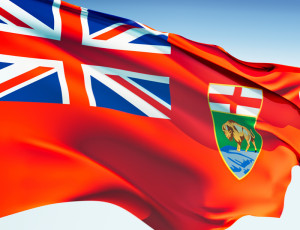